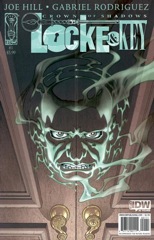 This issue is exactly the kind of thing I wouldn’t expect from Joe Hill. It’s the ghost of Sam Lesser–who Hill turns into an extremely sympathetic character (who knew Locke & Key would be such a good example of feminist storytelling)–versus Dodge in his (or her) ghost-state.

They talk a lot, they fight a lot, the talking and fighting lead to changes in the relationship. It reads like Hill found out he got renewed so he wanted to do something different. Only, Hill and Locke are already successful so such a self-indulgent comic seems out of place.

All of these goings on are distinctly wrong for the comic book medium. They’d be fine in a movie (or TV, wink wink). It’s talking heads without heads. The characters’ voices aren’t distinctive enough for this device to work.

Gabriel Rodriguez tries, but can’t make up for the writing misfire.