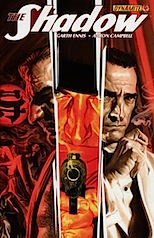 I don’t think Ennis has a good handle on Margo and Cranston’s relationship. He’s trying to figure it out in the story, which is fine, but it’s a minor subplot and it ought to be more. He keeps insinuating things, but never clarifies. It’s a bewildering approach.

Or it would be if he weren’t doing a war comic. It’s not a battle comic, but it’s a war comic–The Shadow, under Ennis’s pen, is about wartime intrigue and he’s great at writing it. There’s a long scene with the Japanese and their Chinese crime boss associate and it’s better than any scene with Cranston or the good guys.

So while it’s an excellent comic for the most part, it’d be better if it weren’t The Shadow.