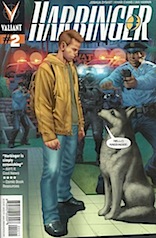 I don’t know if I’d say Evans’s art is better this issue–there’s more action and he can handle the action–but as for the faces… he still seems weak. But I wasn’t paying as much attention, there’s too much else going on.

Dysart opens the issue with another flashback, this time to India (with nice Lewis LaRosa art). It works–showing other Harbingers has an immediate hook, something the main plot line doesn’t yet. For example, the lead brainwashed a teenage girl into having sex with him. Sure, he’s a teenager too, but even his schizophrenic friend knows that sort of behavior’s inappropriate. The lead’s not likable, which on one hand I applaud, but on the other… Harbinger‘s a little too glossy for Dysart to take that approach. It’s not mean, except that one act.

Still, the issue assuages most of my Evans fears; it’s fine, if problematic.