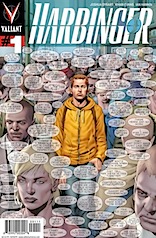 So the character in the first scene is a guy? Someone needs to sit Khari Evans down and have a walk with him about showing gender through facial characteristics. The second time I went back to the beginning of the issue, I noticed without Joshua Dysart identifies character’s genders maybe two would be immediately clear.

Evans’s bad faces–it’s not just gender, but age–make Harbinger occasionally difficult and it shouldn’t be. I had no idea the protagonist is high school age based on the art. When there’s a scene between the lead and his unwilling love interest at her school, it’s weird. And it had my expectations of the characters’ dialogue out of whack. I thought Dysart had a weak moment in a conversation, but he didn’t… the characters are just kids. And Evans’s art didn’t get me there.

With Evans’s involvement, it’s too soon to tell about it.