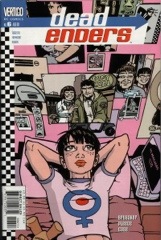 Brubaker runs into a big problem this issue; I’m a little surprised, because it’s an obvious one.

His backup episode, about one of the characters crushing on a guy, is far more effective than his lead story. The lead story is following a plot, it’s increasing tension, it’s got a decent cliffhanger, but it feels constructed.

Meanwhile the backup moves entirely on its own momentum. Pleece and Case are a lot more creative too, because it’s in a less constrained environment. There’s no agenda.

The lead story is also problematic because it requires Beezer to be both the protagonist and the antagonist. He’ll probably turn out being right about things, if only because it’ll create narrative thrust.

But the backup doesn’t need any artificial boosters.

It’s a good and interesting issue–the lead story is strong, it’s just nowhere near as strong as the backup and compares poorly to it.