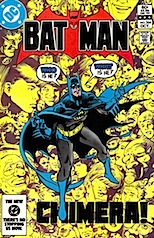 In hindsight, there’s not much mystery to Doug Moench’s new villain. He has a limited pool of suspects–though it’s seemingly larger–but his execution of the investigation is so strong it doesn’t matter.

The issue opens with Jason Todd, run off with the old circus, feeling depressed. He’s investigating a series of home invasions in the towns the circus visits. It almost seems like the issue will be his, but Moench contrives to bring Batman in. It’s hard to get upset, because Don Newton and Alfredo Alcala do an amazing job bringing Batman to the circus.

The final half or so of the issue is just a long chase scene. Batman and Jason separately chasing the bad guy. Moench loses track of Jason for a little too long, but it’s a fantastic sequence.

Moench paces out the ending well. He devises a final, unexpected twist and a solid cliffhanger.