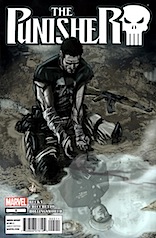 It’s a slightly odd issue. Whoever thought a Punisher Thanksgiving special would be good, but Rucka uses the holiday to give some insight into the cast.

Three months have passed since the last issue and Rucka is catching the reader up with the cast, including the Punisher’s ten-year old sidekick. The sidekick will likely be Frank’s conscience at some point.

I’m not a fan of this boy band Punisher–Bendis’s Ultimate Punisher from Team-Up certainly wasn’t boy band–but Rucka does well with the supporting cast. He works a little on his Lady Punisher storyline, taking his time, kneading the subplot gently. His female characters are better than his male. The guys are just stereotypes, the women have actual depth.

Checchetto’s art is still solid without being sensational or entirely on target. There isn’t a single memorable panel.

The Punisher is professional and competent, but otherwise rather uninspired.