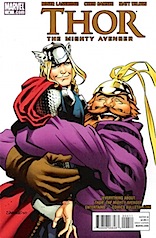 This issue, featuring the Warriors Three—they’re checking up on Thor for his father, unaware he doesn’t remember the details of his banishment—might be the best issue of Thor yet.

It doesn’t do much with the Thor and Jane romance, which Langridge is pacing beautifully, but it’s just such a joy… one reads it beaming.

The issue is played mostly for humorous effect—Langridge’s version of Captain Britain is a hoot—but again he’s able to touch on some rather serious points. With Thor as the stranger in the strange land, this issue gives him friends. More, it lets the reader see Thor with his fellows. It’s not technically important since, you know, it’s a Thor comic and a familiar reader should be able to guess….

But Langridge makes it important.

Samnee gets to do talking heads, battle, romance, humor; he hands them all exquisitely.