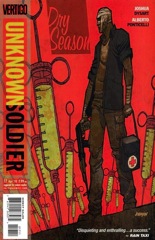 I think this arc runs five issues and Dysart is three in–and wrapping up some of the revelations–so I was wondering how he was going to keep it going. He’s keeping it going by turning the entire comic on its head.

Turning Moses into an unreliable narrator–who isn’t reliable to himself either–isn’t an unprecedented narrative move, but it’s completely unexpected. For sixteen issues, Moses has been utterly reliable.

This issue has a little of the return to action, but it also has a bunch more character stuff. Dysart’s bringing Sera–Moses’s wife–back into the comic as a seen presence, Paul’s making decisions contrary to Moses’s orders. I never think of the series as having a cast, but it does.

This story–especially after this issue–is shaping to be a lot more important than the first issue suggested.