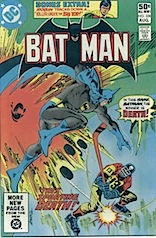 It’s sort of hard to believe Conway wrote both the terrible lead story and the mildly charming Robin backup. I mean, the Robin story–Dick solving a mystery at the circus–has it’s problems, like Conway keeping crucial information until the last scene so as to explain all the problems away… but at least he’s trying.

The Batman lead story is another thing entirely. Not only is there an idiotic reference to fingerprints being found on wet grass, but there’s also a bunch of malarky about the Americanism of sporting events. Alfred, the Brit, says it’s un-American to dislike sports.

The story’s villain is the world’s best (chemically engineered) athlete who decides to kill all of Gotham’s famous sports figures. Batman finds him through fumbling and stops him from killing a bunch of people in a mall.

I don’t know if Conway was just dozing off through scripting or what; terrible story.