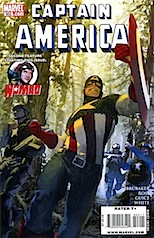 So this is the issue with the “tea baggers,” the issue Brubaker apologized for.

Did he apologize for the rest–how he portrays people in Idaho as psychotic anti-government racists, just waiting for a Hitler to lead them? Because I don’t think he did.

It’s a lead-in story, a ramp-up. I’m pretty jaded on Brubaker’s Marvel plotting style for ongoing series, since they’re usually fake arcs to trade easily but the story just goes on and on.

I guess it’s fine. It’s not particularly interesting though, especially not after the lackluster Reborn.

Bucky doesn’t even get any good moments and he usually gets at least one an issue.

Luke Ross’s art is lame, which is no surprise.

And the less said about the backup story the better, it seems to be for an all ages audience.