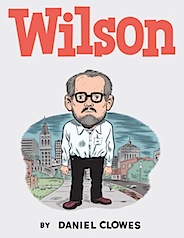 I’ve never read Clowes before. I saw Ghost World and had major problems and assumed I wouldn’t like his comic work.

Clowes sets Wilson up, intentionally or not, as the craziest collection of Sunday strips from a newspaper comic strip. Each page is a one page strip, with some differing art styles someone more involved might have something to say about (why one strip is realistically rendered while another is not). The strips all end with a resolution and observation.

As a protagonist, Clowes’s Wilson is a poor, untalented version of Larry David’s “Curb Your Enthusiasm” persona… wait, describing him as a realistic George Costanza might be a better choice. He doesn’t have friends, he can’t connect with women and his dumb ideas get him in lots of trouble. So, yeah, a realistic George.

Wilson is frequently hilarious, causing lots of audible laughter, usually when Wilson is being a jerk. There’s a lot of the jerkiness at the beginning and it seems like Wilson‘s just going to be a collection of the protagonist insulting people. Then the narrative starts.

Clowes never makes Wilson anything but an insensitive ass, so it’s interesting to see just how much sympathy for the character the narrative can create.

I suppose my only complaint with the plot is Clowes closing it off at the end.

It’s a fast, fun read, with Clowes quietly presenting Wilson‘s more profound moments, as it should be.

I am a little fearful of an upbeat film adaptation.