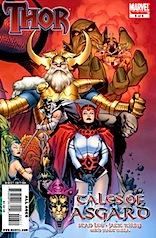 So, for a forty year old comic, originally serialized in back-ups (and a double sized reprint), this issue is essentially a done in one. Thor and his sidekicks (are they called the Warriors Three?) hunt down this bad guy (called Mogul, no relation to the intergalactic Superman villain–this Mogul is from the Mystic Mountain, or Zanadu, or Xanadu or Zandu–lots of spellings) and set out to depose him from his throne.

He’s, in fact, a stand-in for Mohammed, which Lee’s readers probably wouldn’t have realized but I think Stan did. And Stan has Thor and his sidekicks fight for the American way.

In other words, it’s a very political comic book. More, I think, than any Silver Age Marvel book I’ve ever read.