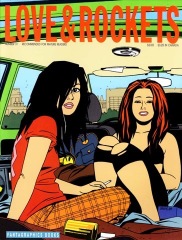 The issue starts with Maggie trying to join Hopey and Tex’s new band. They’re delayed getting back to California, which might not even be on Hopey’s radar. It’s a Maggie and Hopey story, a little different given Hopey’s hair, but also because it’s two pages and (roughly) twelve panels a page. Maggie runs into Ray’s ex-girlfriend. It’s a cute little Locas, but feels like Jaime’s just keeping their burner warm.

Next is Beto’s Poison River. Part three. Teenage Luba gets married. The husband is a band manager and conga player (in said band). He’s much older. He’s also married with at least one child, but Luba doesn’t know about the other family. He’s obsessed with her and nowhere near as creepy as the other grown men pursuing Luba and her teenage friends. There’s also the origin of the hammer. It’s an excellent story; Luba isn’t particularly familiar in it. She’s not the kid from the previous issue, she’s not the Luba from regular Palomar. She’s actually far more revealed than her adult self. The husband, who Beto didn’t identify as a husband, showed up in one panel at the start of Human Diastrophism when Beto was going over Luba’s kids’ fathers. There’s also the start of Luba’s bather career; she and her friends work at the local bath house. Beto does a lot with it, especially since everyone except Luba and her family (who don’t play a big part) are new characters. It’s excellent. Beto makes it seem casual in the excellence.

Then is a Doyle story. Jaime’s not done with Doyle, which is a surprise. It’s a flashback story to 1982, so presumably before Doyle met Hopey and Maggie but after he’d been friends with Ray. Doyle’s just out of jail, looking for Ray (who’s gone east), working for with his girlfriend and Lily, who isn’t his girlfriend yet. Lily and the girlfriend are exotic dancers, Doyle collects the money and gets rough if need be. Jaime structures it all around broken toilets keeping Doyle up at night, which is a special kind of despondence. There’s not much with the girlfriend, but the burgeoning relationship with Lily is really sweet and well-done. It’s out of place in the sweetness, but also perfect. There’s some great art too. It’s just a surprise.

But nowhere near the surprise of the last story, Beto’s Love and Rockets: Premiere. It’s this comic–but sad and dark–story about Steve Stranski, a metalhead surfer who… if you look close… once vacationed in Palomar. He’s taking a couple hot chicks to see this band, Love and Rockets, perform. Only they think it’s the actual band Love and Rockets and not some garage band knockoffs. It’s a fun, goofy story and then all of a sudden Steve meets his friend’s new Hispanic housekeeper and starts crushing on her, even giving her a ride home with pal Gerry (another surfer who vacationed in Palomar). Turns out it’s Riri and she and Marciela are trying to make it in the States. And it’s to be continued, which is another surprise. Beto’s doing Marciela’s story too.

It’s a sort of different issue–even with Luba being active in her origin, it doesn’t feel like Luba, and Doyle’s proto-Doyle, and Maggie and Hopey are just cameoing. But it’s another excellent one. Both Jaime and Beto maintain their ambitions throughout.