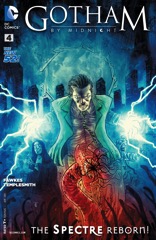 As for Fawkes, he jumps around the cast but doesn’t give them anything important to do. Story arc is almost over, it’s time to hurry. There are a couple hints of character development, but nothing substantial.

There’s also some of the explanation for the arc’s supernatural events. It seems way too large scale for what Fawkes has been doing in the comic. I’m curious to see how he finishes it, but will keep coming back for the Templesmith art regardless. It’s always interesting to see.