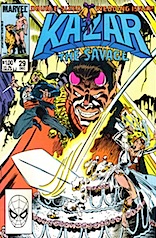 Carlin’s not doing much to make Ka-Zar his own. He follows the existing template well–down to Shanna’s step-daughter being emotionally affecting from her first panel–and it feels like a good impression of Bruce Jones.

Except Carlin doesn’t spend a lot of time on his protagonists’ emotions. He doesn’t keep their self-reflections going throughout the issue, instead using them episodically. It’s not a bad approach, it just gives the narrative a staggered feel.

To be fair, Carlin does get a lot done. He probably has enough content in the issue it’d run six “decompressed.” Ka-Zar and Shanna have a wedding and even get married, along with fighting a demonic bad guy and saving some people. Throw in another five or six pages of villain scenes and you’ve got a packed issue.

Frenz does fine fitting it all in. Even if his pencils aren’t beautiful or even ambitious.