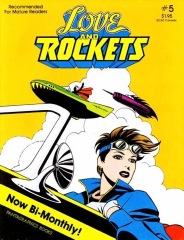 Hopey gets to headline her first story in Love and Rockets #5. She’s been sidekick up until now. The story’s straight comedy, with Hopey tempted to return to her graffiti days; the fresh white wall across the street is proving too hard to resist. Maggie and Izzy just want what’s best for Hopey and best is tagging the wall.

There are cops to avoid, paint colors to choose, all sorts of little things Jaime touches on in the eight page story. Lots of good monologues. Lots of good laughs in the dialogue, lots of mood. It’s not an ambitious strip, but it’s still an excellent one.

Then comes Beto’s Fan Letter. It’s a first person narrator talking about his favorite band, “Twitch City,” also the name of an unrelated Beto strip in a previous issue. It’s the story of a punk band’s rise and fall, in mostly text. Beto paces it beautifully, the momentum of the text paying off in the art. It’s excellent. And kind of ambitious.

Then comes Act of Contrition, Beto’s return to Palomar. It’s a few years later and Luba’s the main character. None of the last Palomar story’s principal cast return. Some get a mention. Some previous supporting cast cameo. But it’s a new thing.

Then Beto’s got Errata Stigmata again. She was in the first issue of Rockets and a comic book character in the fourth (or third). Now she gets an initially heady, then jokey strip about her boyfriend only being in it for her stigmata. Great art, great pacing of the characters through the panels (Beto and Jaime showing off the comic “strip” skills in different ways this issue). Great punchline.

And then Jaime’s got a lovely Rocky and Fumble. It’s their origin story. The art is beautiful, not a lot of backgrounds, a lot of mood. Perfect summary storytelling on the flashbacks. It’s lovely. Jaime’s style is always clean but it’s a little cleaner here than in Locas, giving the strip its own feel.

Jaime also shows off his ability to deftly tug the heartstrings, pacing the strip just right to get the most effect.