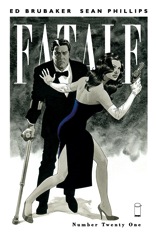 This issue, while obviously winding up to the big finish, is a bit of return to form. Brubaker takes the time to introduce a new character–one impervious to Jo's charms–and he's a nice addition. There's some levity amidst Jo's preparations.

Speaking of Jo's preparations, Brubaker does go too far with a reveal in the last page or two. He makes Jo do something incredibly dumb. After showing her to be plotting and careful, she goofs. It doesn't work.

But Jo's really back to being the mysterious femme fatale this issue. Nicolas is the protagonist, meeting Jo's sidekick, trying to figure out what's going on with her–he hasn't been the protagonist for a long, long time. And the series is only twenty-one issues in and the guy feels foreign to the captain's chair.

It's an outstanding issue; still, it also shows how reductive Brubaker's being with the series's many intermediary details.