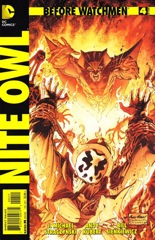 Once again, I’m left wondering if there’s some intentional misogyny in these Before Watchmen series just because it would horrify Alan Moore.

This issue we learn Nite Owl has this costumed madam–something Straczynski never makes feasible–in love with him and he’s in love with her but he later mocks her in Watchmen to Laurie.

I’d forgotten that particular detail from the original series, but wow, Straczynski really harps on it. I like how Hollis gets a pass, how Rorschach gets a pass, but not the madam. Unless Straczynski’s whole point is to make Dan unlikable and to make people dislike him when rereading Watchmen.

As I doubt anyone would reread Nite Owl. I’m not even sure the editors read it.

It’s shallow, trite and mean. Lame tie-in to the original series at the end too.

Kubert’s art is awful but I think his dad had just died.