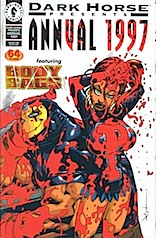 For a Presents annual (or oversized special), this one has a lot of solid work.

Pearson’s Body Bags is a fun diversion. The art’s great and the story moves. It gets a little visually confusing, but it’s good.

And Verheiden (with Marrinan) finally produces a decent installment of The American. It’s a thoughtful story, very well written.

Arcudi and Musgrove’s The Oven Traveler is dumb. It’s a one page story dragged to four.

Aliens (from Smith and Morrow) is atrocious. It’s Aliens meets Westworld. If it weren’t terrible, it’d be an interesting genre mix—plus, Morrow can’t draw the aliens. They look awkward and goofy, not at all frightening.

Jillette and French’s Rheumy Peepers and Chunky Highlights is overwritten but mildly diverting….

Stephens and Allred’s The Stiff is decent, if too silly.

Then there’s a decent Pope finish. It’s a talking heads story, which seems like a waste of Pope.