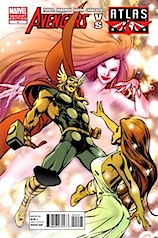 Each issue of Avengers vs. Atlas ends with an Atlas backup, which is appropriate… since it turns out, the series isn’t actually an Atlas book. I mean, it’s fantastic and I recommend it highly, but it’s an Avengers book.

Boiled down, it’s a love story, full of enthusiasm and absent any of the baggage forty-seven years of stories have saddled on the Pyms.

It’s touching, really, and rather sentimental (in a good way). Parker’s able to present the Avengers, in a pseudo-retcon, full of heroic vigor, but never condescendingly. The series plays to all his strengths as a writer (at least of Marvel superhero books and the strengths he’s exhibited so far in his career).

Parker treats Atlas–though they have some great moments here–as observers. They get to witness some special things, as does the reader.

Excellent Aaron back up too. Concurrently funny, sad and nostalgic.