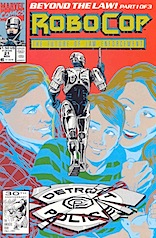 So when the series started Robocop 2 hadn’t been released and the Old Man was still a good guy. Now he’s a bad guy. But still not as bad as he was in Robocop 2. This issue ends with him manipulating Robocop into assassinating a foreign dictator.

Meanwhile, Robocop’s cracking heads (but not enough to really find his wife and kid) and the cops are under assault and Robocop’s abandoned them in general and Lewis in particular. I don’t see Lewis’s crush working out for her here.

Sullivan’s back, inking himself and Robocop looks great. Sullivan spends a lot of time on him, making him look good. He doesn’t spend anywhere near as much time on the regular people, which is a problem.

Furman packs the issue with newscasts and details about the foreign dictator and it’s a bunch of fluff. He’s pretending to have layered this story but didn’t.