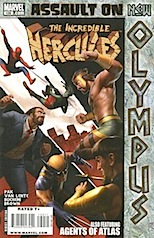 Wait, Amadeus Cho is straight? I didn’t want to say they wrote him gay because I thought he might be Marvel’s attempt at a gay mainstream character but if he’s straight… it’s the most incompetent job of someone writing a heterosexual since… well, I don’t know when, maybe… umm… wow. He’s straight, really? And in love with a gorgon?

Anyway, this issue is lame, big shock. Lots of wasted pages with superheroes fighting Greek gods, which is boring as all hell. Edith Hamilton be damned, let’s read some Marvel gods. It’s laughable compared to what Perez did on Wonder Woman, but whatever.

The art’s weak as well. Especially on Amadeus Cho.

The Atlas backup is nice, Parker getting his backup pacing chops going here. There’s some humor, some action. It feels like Atlas. It’s just too bad there’s so little of it, especially given the feature story is such crap.